Uh, yeah, do I really have to write another entry about Fire Emblem? Just play the damn game already.

But while I’m here, we need to talk. Every time you defeat an enemy in, well, just about any game, the corpse goes through some dying animation, then digi-mortis sets in and they vanish from the screen. Evil is punished and the hero goes on with his quest. Everyone is satisfied, right?

Like independent contractors on the death star, a horse’s personal politics deeply influence which riders it will bear.

Except I noticed something this time around. If you’re fighting against a mounted unit, the enemy soldier slumps down on his horse, and then both of them vanish. That poor, innocent horse! Just shoved still-breathing into the grave like the horse of some deceased pharaoh. What happens to it? Where does it go? 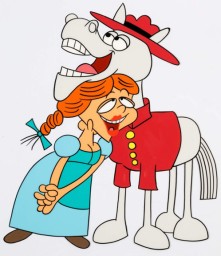 Apparently this was a big enough issue that the game had to weigh in on the ethics of mount loyalty. At the very end after felling the evil king, there’s a lengthy (unasked for) cut scene involving an extremely minor sub character being in love with the king’s mount (both pictured to the right). This runs on in Fire Emblem’s traditional style of half National Geographic documentary and half verbal dysentery.

While the game was true to form and well worth playing, I think I cared more about high school history exams than the ending to the game, which felt like it resolved nothing at all and was just trying to sell you the $90 sequel for the Wii. (Is that a Dolphin I hear chattering in the distance?)

Dear god, will someone just take Twitter away from Trump already?